Why It’s Worthwhile To Unplug

Some reasons for getting away are obvious, especially if you are a parent. Listening to my children chatter and watching them marvel over the sight of our first castle makes all the preparation in the world worthwhile.

But it’s easy to lose sight of the fact that unplugging is important for your work, too. Especially if you are a writer or a creative professional, getting out-of-the-ordinary input is crucial. 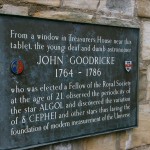 In that vein, here are some the most interesting things I’ve seen on my trip so far.

• Who John Goodricke is. We stumbled across a plaque in a wall just outside the York Minster describing the work of the astromer. It reads:

“From a window in the Treasurer’s House, City of York, the young deaf and dumb astronomer John Goodricke, who was elected a fellow of the Royal Society at the age of 21, observed the periodicity of the star ALGOL and discovered the variation of CEPHEL and other stars thus laying the foundation of modern measurement of the Universe.”

• The etymology of the word treadmill or treadwheel. (which is often what it feels like I’m on). In the Beverly Minster, a giant wheel is attached to a pulley system that raises and lowers several-ton objects from the floor of the church through the ceiling to the workshop in the attic. That wheel is a treadwheel, and it operates when a person steps inside and starts walking. Here’s a picture:

• I also learned the word lickspittle, when I was browsing an old history of Edinburgh. It means “obsequious.” My goal was to use it in a piece of writing – and I’ve just done that.

The Lifestyle, Uncategorized
Posted on July 16, 2012 by Elizabeth MacBride Leave a comment
Powered by Disqus