Balance Your Kids’ Lives–and Your Own

My husband and I spent our first six years as parents raising four small children in Jersey City, N.J. We lived on a gentrifying block in a city where a substantial portion of the population lives in poverty.

Because we weren’t happy with the results the public schools were getting we decided to home school our oldest girls, who are twins, for kindergarten. To make sure they had opportunities to make friends, I spent hours searching for activities for them. I found a few good ones–an occasional arts and music program that a local artist had set up in the library, a karate school, a private Spanish class, and a homeschooling play group. The options were pretty limited, and sometimes sporadic, and we never became overscheduled. 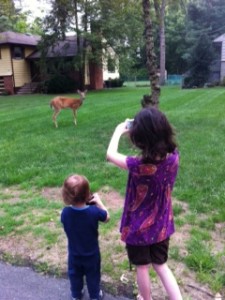 We have started to think this deer likes to pose.

When we moved to a town in suburban, N.J. known for its great schools, I was thrilled to see the number of activities for kids. In  my town of just over 20,000 people, the choices are staggering. They include not just basic sports like soccer but niche programs in areas like fashion design and robotics. Most programs are run by groups like the YMCA or the town, which keep the prices affordable. It was exciting to finally be able to offer our kids activities that really fit their interests. But quickly, our family schedule got packed. At one point, the girls had four extracurricular activities each. My husband and I were exhausted from driving our kids around continually.

This summer, we decided to take it slower. We signed up for a couple of weekly sports activities at a nearby YMCA but decided to give them time to do things that it’s hard to fit in during the school year, like play all day if they want to.

It’s been a really happy summer for everyone. My kids have done things like build a beading station where they churn out necklaces, written story books, made hand painted puppets, and taken photo after photo of a mother deer and her fawn who show up outside our house every day–without my prompting. And it’s been the first time I’ve really had fun living in suburbia, instead of feeling oppressed by the lifestyle. I’ve been enjoying my daily life much more without having to constantly dash out for yet another enriching activity.

So I was glad to discover a new book called Teach Your Children Well by Madeline Levine, a private psychologist who works with teens in California. After decades of treating children of affluent parents, she has gotten frustrated with how our culture is running kids ragged with constant structured activity, both at intense, high-pressure schools in extracurriculars that can be just as demanding. The families she sees are often so busy that parents can’t be emotionally present for their children–and it shows. She shares cases of kids who are crushed by anxiety or act out by abusing drugs, drinking, etc.–sparked by a frenetic lifestyle that well-intentioned parents have planned for them.

“Our children are increasingly deprived of many of the protective factors that have traditionally accompanied childhood–limited performance pressure, unstructured play, encouragement to explore, time to reflect,” she writes.

Dr. Levine encourages parents to push for changes in our educational system to lessen the pressure on kids and also to rethink the choices they make on behalf of their children. “Your child’s `self’ is not lost or hiding, waiting for you to flush it out…” she writes. “Your child develops a sense of self not simply because you’ve paid attention to and cultivated every interest your child has.” Children also need time to be part of a community where they have an opportunity for “meaningful contribution and connection with others,” she says.

Dr. Levine has been surprised by the size of the audiences that have come to hear her speak, and by how receptive parents are to her, but I’m not. It’s hard to say no to activities that seem like they will be a great experience for your children. Many parents are having a hard time with this.

One of the benefits of freelancing is being able to be available to our kids during the day. But as Dr. Levine points out, there’s a difference between being ready to chauffeur them to yet another drop-off activity and taking times to do things as a family. She suggests a more balanced mix of both–and it’s a good reminder, with school getting underway.