From Freelancer to Multimillion Dollar Business Owner: Tips from an Entrepreneurial Immigrant

For immigrants to the U.S., breaking into the freelance world can seem daunting. Even if you have a great professional network overseas, it can be challenging to get a toehold in a brand new market. But that doesn’t mean it can’t be done.

A few years ago, when I was establishing my freelance business, I met Foulis Peacock, when he hired me to write some articles for a then-upcoming website aimed at entrepreneurial immigrants called Immpreneur. He told me his own inspiring story of freelancing his way into a fast-growing business. Recently, it occurred to me that his experiences have lessons for other immigrants wanting to become freelancers, so I asked him if I could interview him for the $200KFreelancer. 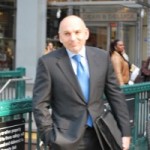 Peacock came to the U.S. in 1989, after starting a career in media sales in the U.K. on Fleet Street. Accepting a job offer from media sales giant Publicitas in the U.S., he realized, as he got the lay of the land, that many big publications here lacked a sufficient-sized sales team to sell ad pages in their international editions.

It dawned on him that he could build his own thriving business in this niche. He began approaching publications to propose selling space in their English language international editions as a contractor. Arming himself with a business plan, he persistently called and emailed prospects at Time Inc. “I would send them a letter every week or make a phone call,” he recalls. I said, “This is a $5 million piece of business you’re missing.”

Finally, he persuaded an executive at FORTUNE to hire him as an independent contractor in 1992 and he was off and running. The executive simply lumped the cost of paying Peacock’s commission and travel expenses into the department’s travel and entertainment budget. “We broke some huge accounts that FORTUNE didn’t have before, like Boeing,” he says. He soon found himself running a media rep business with a partner that produced special advertising sections for publications such as FORTUNE and Forbes.

Discovering that their sections on diversity were particularly well received by advertisers, Peacock and his partner launched a New Jersey company called Diversity Inc. to focus on them. Gradually, the duo built the company into a hub of information on corporate diversity management, with their own magazine and website. In Sept. 2009, Peacock decided to cash out — “It was a $9 million business when I left,” he says — and move on to his next venture, Immpreneur. Immpreneur officially launched last July.

Peacock’s advice to freelancers who want to break into the U.S. market? “In this economic situation, companies still need talent,” he says. “But they are going to be less willing to go through the expense of hiring.” Mention to prospects that hiring you as a contractor is a more cost-effective solution than bringing on a permanent, full-time employee, he advises.

And tap what he calls your “immigrant advantage.” As a newcomer to this country, you may see things differently than people born here, Peacock says. Look for ways to draw on your unique expertise and connections to help potential clients make money, as he did when he realized he had the contacts overseas to help big publications sell ads in their international editions. “Often times, we think we’re locked out,” he says. “You’ve got knowledge and skills from your home country.”