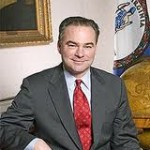 Tim Kaine: The eyebrows are much less noticeable in person.

On Friday, I went to a women’s roundtable coffee with Tim Kaine, the former governor of Virginia who is now running for Senate. He talked about jobs and the economy, and called “talent” the critical issue for growing the economy. I agree with him on that, as does probably any other small business owner I’ve ever talked to–or anyone working today. Nearly every industry that I know of suffers from a lack of employees who have even basic job skills. Some industries, like technology, are on a desperate search for people with skills in engineering and mathematics.

Then he went on to talk about access to capital as another critical issue for small business–but I took issue with him on the priorities. Access to capital is important for some old- economy businesses, but the startup scene has changed. It’s possible now to start a company on a dime.

What’s more crucial for small businesses and self-employed people are issues like simplifying the tax code, cutting regulation and affordable health care. I mentioned my fury at having to pay nearly 50% of my income in taxes on my income as a self-employed person; and our travails at $200kfreelancer in trying to get a trademark. (See our 4 Winning Tax Tips for Freelancers and To Trademark Or Not To Trademark)

Why is it important to help us micro-business people? The number of independent contractors is rising: Though it was unchanged from 1995 through 2001, at roughly 8.5 million, it rose significantly to 10.3 million in 2005, the last date for which data is available. Economist Jeffrey Eisenach is quoted in this story as saying that the number is up 1 million since 2005. Moreoever, a rising proportion of independent contractors are in high-paying fields, spinning off increasing economic benefits for everyone.

At the end of the coffee, Kaine asked me to send him an email that outlined some of the concerns of freelancers and small businesses in technology and new media. Anyone have any issues to raise before I put that together? Please leave ideas in the comments section.