A Tool to Help You Tackle Big Projects

I’ve been working on a memoir for the past three years or so. It’s the first really long thing I’ve written–beyond the 3,000 or 4,000-word feature story. I didn’t have a clue how to organize my research when I started. Not being able to afford an assistant, I looked for a software program to help.

I read about Scrivener, a program to help you organize longer works, on a listserv that I’ve belonged to for years, called WriterL. I’ve heard other writers talk about another program called yWriter, which is free–though I have no experience with it myself.

Scrivener’s spokesman says the software’s ideal user is someone writing a piece of some complexity, “be it a novelist or academic with plenty of research material, an attorney with case history to collate and organise, screenwriters, journalists like yourself, biographers or memoirists, playwrights, short-story writers, comic or graphic novel writers, musicians penning a song, business and technical writers, translators, lecturers developing class plans, the list goes on. … We owe a lot to our enthusiastic users that have helped spread word of Scrivener.”

(As an aside: WriterL is a listserv maintained by Jon and Lynn Franklin. I remember as a journalism student reading Jon’s story, “Mrs. Kelley’s Monster,” which I believe is still one of the best newspaper feature stories ever written. Published in the Baltimore Sun, it won the Pulitzer Prize for feature writing in 1979. Here’s a link: http://jonfranklin.com/Stories/Mrs_Kellys_Monster.html.)

All’s that’s a long-winded way of saying that when I saw a recommendation on their listserv for Scrivener, I decided to spring for it. It was $25 (this was a few years ago.). The price is up to $45. Scrivener is a produced by a small company in Cornwall, England, and it has a nice, chatty web site.

Here are the pros and cons as far as I see them:

It’s easy to drag and drop research materials, like pdfs and photographs, and organize them. Instead of a file cabinet full of paper, I have it all in one place on the computer. Each separate piece of research has a name, which makes it reasonably easy to find. It’s also easy to group the research into topic areas or chapters.

I found that it helped me focus if I had a different environment for writing. I do most of my day-to-day freelance work in Microsoft Word; switching over to Scrivener put me into the mode of going deeper and writing slower.

There are lots of nifty 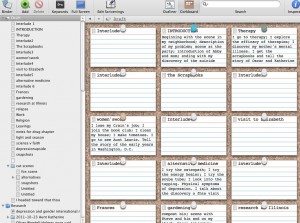 organizing tools, like binder icons and a bulletin board that help you see the structure of what you’re working on. I’m including a screen shot of one of those features.

You might consider the fact that it costs money when there are free programs on the market to be a downside. I generally think that you get what you pay for. I want people to pay me for my writing, and I don’t mind paying a reasonable sum for the convenience of a good software program and a responsive help desk.

It’s just not as robust a writing program as Microsoft Word. For instance, I have trouble with the search feature, and formatting is not that great in Scrivener.

I also had trouble exporting the document to Microsoft Word, though one of the features of the new version is that it promises to do this with ease. As I’m getting my book ready to send to agents, I have cut-and-pasted everything from Scrivener into Microsoft Word for the improved formatting abilities of the more powerful program. When I raised this issue with the company, the spokesman pointed me to this feature on youtube, about compiling and exporting.

If I’d watched that first, I would have saved myself a few headaches, for sure. Shakespeare commented better than me on the reason why I did not: “If to do were as easy as to know what were good to do, chapels had been churches, and poor men’s cottages princes palaces. It is a good divine that follows his own instructions I can easier teach twenty what were good to be done, than be one of the twenty to follow mine own teaching.”