Staying ahead of trends in the demand for freelance services will help you figure out when it’s time to ask clients for better pay.

If you haven’t come across the IQIndex, which tracks temporary workers’ bill rates, you’ll find it to be a nifty tool for figuring out where you stand, pay-wise, to other freelancers, temps and contractors. IQNavigator, the company behind it, offers tech solutions to help companies manage “contingent” workers and puts out free downloadable reports on its site. The rates reflect what companies pay for the help, including the markup for any agencies that act as middlemen, but they provide an idea of the going rate. 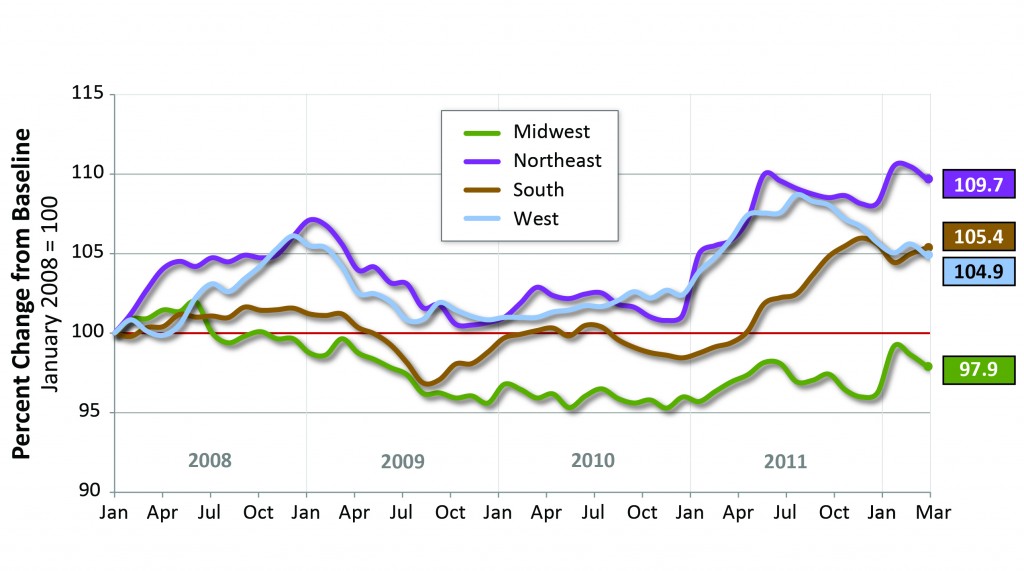 How pay for contingent workers has fluctuated by region. Source: IQNdex

The latest index, for the first quarter of the year, found that temps in professional and managerial jobs are seeing an increase in pay. (Good news, consultants!).

Pay rates are climbing in Columbus, Ohio; Louisville, Los Angeles and Philadelphia,–while they’re dipping in Chicago, Denver, Pittsburgh, and Miami. Overall, temps in the Northeast are seeing increases, while those in the West watched rates decline in the first quarter.

It’s fascinating to see why some cities are seeing rates go up for temporary workers. For instance, in Columbus, software developers and project managers are pulling in the best rates, driving an overall increase. In Philly, business analysts and regulatory compliance analysts are in hot demand and pushing up pay rates in the city. In Louisville, there’s hot demand for desktop support staffers and network engineers. And in Los Angeles, systems analysts and web developers are feeling the love from employers who need their expertise.

Not every city is seeing a boom in pay for free agents, of course.  It may not be the  best time to negotiate for better rates if you’re an engineer in Chicago, a business analyst in Pittsburgh, a production associate or technician in Miami, or a technical or business consultant in Denver.

Who’s bringing in the best rates? This won’t surprise you if you’re based in Silicon Valley, but for the first quarter, projects managers in the West topped the list. Among those commanding rates on the higher end of the scale for their field bill rates ranged from $86 an hour–for someone with up to two years of experience–to $145 an hour, for someone considered an expert. For those on the low end, rates in that same market ranged from $58 to $113 an hour. IQ Navigator excludes rates in the top 10% and the bottom 10% to avoid distorting the index.

Software developers, who are in hot demand in cities like New York with a fast-growing tech scene, are also cleaning up. In the Northeast the highest paying market for this work, their bill rates ranged from $76 an hour to $106 an hour. They’re getting rates ranging from $71 to $107 an hour in the South and from $61 to $107 in the West.

It’s important to bear in mind that if you’re one of the top players in your field and have a lot of experience, you can charge more. For instance, I know several seasoned, top tier web designers in New York City who charge $150 an hour and tell me that the going rate for folks at their level of expertise ranges from $125 to $150 an hour or more.

Another interesting finding: While there’s still a significant pay gap between permanent workers and temps, it closed somewhat in 2011. If employers are valuing contingent workers’ contributions more, it could bode well for the indie crowd in the future.